Welcome to my review of The Bone Field

would I read more of this series? Yes in fact I have book 2 to read and review

While it it slow though out the book for some unknown reasons I ended up liking it a lot more then I thought I would because of it, in fact the pacing helped in a lot of reasons and to name a few  it helped bring the places and descriptions as well as the characters to life, and it even give it the feeling like it was one of my  old detective books or movies that I love t read and watch.Another thing is that the main character was a former-paleontology-student turned private-detective which is way different then anything I've read because even in the old detective stories the main character was a cop of some shorts or even a soldier that become came a detective. And while it was slow like I said before it still had everything that make a great mystery which is Drama, mystery, fights, and plot twists . With that said I want to say think you the publisher as well as the author and Netgalley for letting me read and review it. 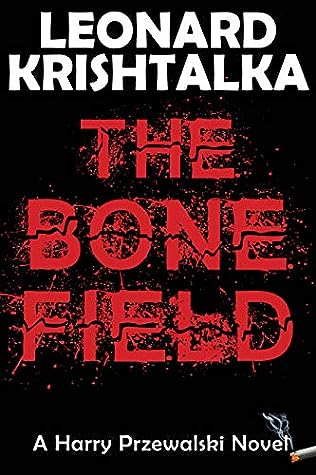 Paleontologist turned private investigator, Harry Przewalski, excavates the dirty underbelly of people’s lives, unearthing sexual betrayals, treachery, fraud and murder buried beneath the science of petrified shards, skin and bones.  Ultimately, he must face a brutal killing in his own past, when he fled to a desert war and came back with a gun and a license to detect.

In his first case, The Bone Field, Przewalski chases a missing paleontologist across 80 million years of intrigue and death, from a Wyoming bone field of petrified skeletons to the bone rooms of the museum.
World-renowned museum paleontologist, Peter Marchand, goes missing while leading a dinosaur dig in the sweltering, desert badlands of Wyoming. He has made enemies from his serial womanizing, ruthless dealings, religious blasphemy, and unorthodox theories. Hired to find him, Pittsburgh private detective Harry Przewalski uncovers a tangle of sexual deceit, betrayal, and scientific fraud. Ultimately, he must excavate the nightmares in his own extinct past to keep from being killed.

The first installment in the Harry Przewalski series. The second book in the series is Death Spoke