My thoughts
Rating: 5
Would I recommend it? Yes
Will I read more of the series ? Yes, in fact I have the complete series to the King of the Castle to read and review. And after reading this I can't wait to start reading those .
Would I read more by this author? Yes
Even though I have yet to read the Kings of the Castles , as soon as I saw this I jumped at the change to read it , and I'm so glad I did , one note I would say is that its best to read the first series first to get any idea of who's who , but I had a some what idea since i started reading the first book to the Kings of the Castle and sadly didn't finish it because I ended up getting ill at the time and after reading this one I can't wait to jump back in to that one and finish the series.Now on to what i though of the book: The author has a way of writing that brings to life her characters as well as the places she uses in her book, she brought to life how life was and is different from where I live and how life is different for some parts of Durabia ,how the women are treated different  and how the costumes are as well, but my favorite thing about this book was the two many characters Kamram and Ellena and how strong together as well as a part they was, and how well the characters just came together, with that said I want to thank Independent Publishers Group as well as NetGalley for letting me read and review it . 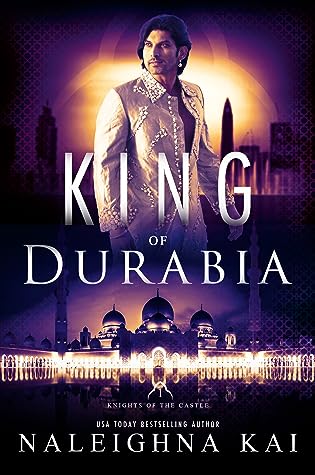 Title:King of Durabia
Series:Knights of the Castle #1
Naleighna Kai
Genre: Multicultural & Interracial Romance
Pub date : July 28th
Pages:200
Books in series :
Book 1 - King of Durabia
Book 2 - Knight of Bronzeville
Book 3 - Knight of South Holland
Book 4 - Lady of Jeffrey Manor
Book 5 - Knight of Grand Crossing
Book 6 - Knight of Paradise Island
Book 7 - Knight of Irondale
Book 8 - Knight of Birmingham
Book 9 - Knight of Penn Quarter
Series before the Knights of the Castle is
Kings of the Castle:
Book 1 – Kings of the Castle (the introduction to the series)
Book 2 – King of Chatham
Book 3 – King of Evanston
Book 4 – King of Devon
Book 5 – King of Morgan Park
Book 6 – King of South Shore
Book 7 – King of Lincoln Park
Book 8 - King of Hyde Park
Book 9 – King of Lawndale
About the author:
Naleighna Kai
Naleighna Kai is the USA TODAY bestselling author of Every Woman Needs a Wife, Open Door Marriage, Kings of Devon, Slaves of Heaven, and Kings of the Castle. She is a contributor to a New York Times bestselling, Mercedes Benz and the E. Lynn Harris Author of Distinction. She started writing in December of 1999, independently publishing her first two novels before acquiring a book deal with an imprint of Simon & Schuster and then a book deal with an independent publishing house founded by two national bestselling authors.
Naleighna is the CEO of Macro Marketing & Promotions Group, the founder of the author support group M-LAS, as well as the marketing consultant to several national bestselling and aspiring writers. She is also the brainchild behind the annual Cavalcade of Authors event which takes place in her hometown of Chicago. Naleighna pens contemporary fiction, erotica, and speculative fiction and is currently working on her next novels: Mercury Sunrise and King of Durabia. Visit her on the web at
webset:www.naleighnakai.com

When the reward for a good deed results in a gracious offer of marriage, all Ellena Kiley wants to do is throw that “prize” back into that proverbial sea which has “plenty of fish.”

Kamran, the handsome and wealthy former Crown Prince of Durabia, realizes he has a secret weapon in a fiery, sultry American and is unwilling to let such a wonderful gift escape his grasp. Ellena is the sister of the Kings of the Castle and right-hand woman to Dro Reyes and their whirlwind courtship puts other forces in play, thrusting this unlikely couple into the center of a nefarious plot to ensure Kamran never regains his former position, or the favor of the Sheikh.

He has no choice but to bring in the Kings, knowing that when her nine American brothers storm into Durabia, nothing in Kamran’s kingdom will never be the same.