The League of Wives: 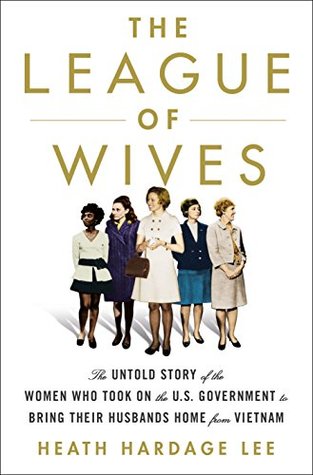 The League of Wives: The Untold Story of the Women Who Took on the U.S. Government to Bring Their Husbands Home

The true story of the fierce band of women who battled Washington—and Hanoi—to bring their husbands home from the jungles of Vietnam.

On February 12, 1973, one hundred and sixteen men who, just six years earlier, had been high flying Navy and Air Force pilots, shuffled, limped, or were carried off a huge military transport plane at Clark Air Base in the Philippines. These American servicemen had endured years of brutal torture, kept shackled and starving in solitary confinement, in rat-infested, mosquito-laden prisons, the worst of which was The Hanoi Hilton.

Months later, the first Vietnam POWs to return home would learn that their rescuers were their wives, a group of women that included Jane Denton, Sybil Stockdale, Louise Mulligan, Andrea Rander, Phyllis Galanti, and Helene Knapp. These women, who formed The National League of Families, would never have called themselves “feminists,” but they had become the POW and MIAs most fervent advocates, going to extraordinary lengths to facilitate their husbands’ freedom—and to account for missing military men—by relentlessly lobbying government leaders, conducting a savvy media campaign, conducting covert meetings with antiwar activists, and most astonishingly, helping to code secret letters to their imprisoned husbands.

Would I read more by this author? yes

Wow this is why I love reading nonfiction so much because it brings to life the history that we never hear about while we were in school because while I do remember hearing and talking about Vietnam but never have I heard anything about these brave women who came together to help bring their husbands home. As I was reading it all I can think  of was how brave they were and that they deserved their story to be told and the author did an amazing job bring their lives as well as this part of our history to life. The hard ships they went though trying to found out what was going, as well as  trying  to get someone or anyone to listen shows just how strong they was and had to have been. And the way they was treated by our government was just wrong, like they couldn't even get their husbands pay to pay bills, get food or any of that stuff,and was told to not even talk about their husbands out side their families .They had no support from the government just themselves and each other, until one man came forward to help them. And even then it could mean death for their husbands but what else could they do. But this story is't just about them, its all so about the POWs and what they went though as well and how they was treated from been beaten , to tortured to be starved , to the point that the captors even tried to make them betray what they believed in. And right about now your probably asking what good is a story like this because it won't or can't change anything , and here's where I would said " its a story of heroes who fought bravely in Vietnam, were captured and cruelly tortured while held prisoner.
It's also the story of heroes who fought bravely and unceasingly to bring them home.Its a story that needs to be so we can never forget and its a story that shows us just how strong we can be when others say we can't do anything. So with that I want to thank NetGalley for letting me read and review it.