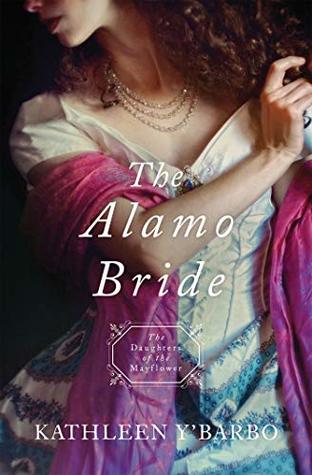 Series:The Daughters of the Mayflower Series #7

Will Ellis Lose All at the Alamo?
Ellis Dumont finds a man in New Orleans Grey unconscious on Dumont property in 1836. As his fevers rage, the man mutters strange things about treasures and war. Either Claiborne Gentry has lost his mind or he’s a spy for the American president—or worse, for the Mexican enemy that threatens their very lives. With the men of her family away, Ellis must stand courageous and decide who she can trust. Will she put her selfish wants ahead of the future of the republic or travel with Clay to Mission San Jose to help end the war?

Join the adventure as the Daughters of the Mayflower series continues with The Alamo Bride by Kathleen Y’Barbo.

Would I recommended it? Only to the ones that love this type of romance.

Will I read more of this series ? I have a few to read but after reading them I won't be going on with the rest of the series

Would I read more by this author? no

Sadly this series isn't for me since I can't seem to get into Christian  Romance, but on the other hand I do love  historical romance just not this type. The story is well written and she does bring her characters to life as well as the history and places she's written about,But I'm just not enjoying it as much as I was hoping.And at times I want to just put it down but that's  just me and since I do have a few of the others I'll be reading them as well and hopping that there's something about this series that I'll like to keep going on with it, With that said I want to Thank NetGalley for letting me at least try this out to see if its something I would like.