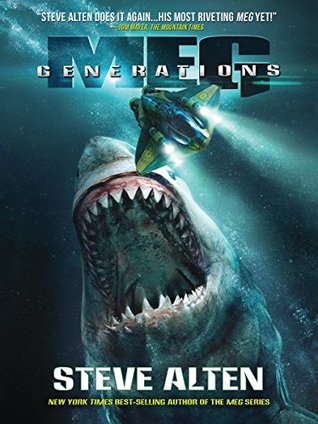 In MEG: Generations, Steve Alten New York Times bestselling author continues his terrifying series.
DUBAI: An impossibility is being taken to the Middle East. The transport vessel Tonga is carrying a liopleurodon to the City of Gold. But while investors gawk at the prehistoric creature, any even more dangerous creature is beginning to stir.
The megalodon shark that Jonas Taylor worked so hard to capture is coming out of it’s drug-induced stupor and refuses to be contained. No both ancient creatures, older than mankind itself, are loose in the waters of the Arabian Sea, and the region will never be the same.
My thoughts
Would I recommend it? Yes
Would I read more of this series? Yes, in fact I own books 2-4 and have already read book 2 even though its been years since I've read it and at the time I didn't know it was part of a series.
Would I read more by this author? Yes
First off I want to thank the publisher for granting my request of this book, as soon as I saw it on NetGalley I know I had to see if I could request it and the very same day i found out that I got it , I was so surprised that I just wanted to say thanks, because even though I've only read book 2 and I've seen and even own the movie that was made from book 1( The Meg 2018) its one of my favorite series to read.
Now lets get on to what I thought of the book itself :
Even though this is book 6, I had no trouble understand what was going on thinks to the author reintroducing the characters and giving you a little bit of their back story. This is the type of story I love to read and get lost in where you have a man vs nature.And it shows what might be out there since we still don't know what kind of creatures live in the deeps part of the oceans , and yes I do know that this is science fiction but every day we make discoveries that can't be explain or that we thought was extinct. Other thing I loved about this story was the feeling that it give you when even one of of the creatures came on scene which is funny because every time that would happen I would start to think of the song from Jaws ( you know the one, where every time someone was about to die the music would start to play), what can I say i love when a book like this gives me all the stuff  I love in a horror book or movie which is that it keeps you up all night so much so that you don't want to go to bed and just want to keep reading but when you do go, you start to dream of a man eating shark , or maybe that's just me. It has the blood and gore in it ( ok may that makes me a little bloodthirsty) as well as the feeling that you don't ever want to go back into the water again. And its a perfect read to read right now with all the craziness going on, with that said I want also give thanks to NetGalley for letting me read it as well and I can't wait to see what happens next .