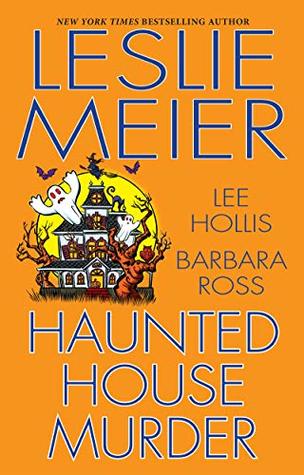 HAUNTED HOUSE MURDER by LESLIE MEIER
Newcomers to Tinker’s Cove, Ty and Heather Moon have moved into a dilapidated house reputed to be a haven for ghosts. Now strange noises and flickering lights erupt from the house at all hours and neighborly relations are on edge. And when a local boy goes missing near the house, it’s up to Lucy Stone to unravel the mystery of the eccentric couple and their increasingly frightful behavior.

DEATH BY HAUNTED HOUSE by LEE HOLLIS
For the past two years, the house next door to Hayley Powell has sat abandoned after the owner died under mysterious circumstances. The Salinger family has recently taken possession of the property, but the realtor behind the deal has vanished—after a very public and angry argument with Damien Salinger. If Bar Harbor’s newest neighbors are murderers, Hayley will haunt them until they confess.

HALLOWED OUT by BARBARA ROSS
With its history of hauntings and ghost sightings, Busman’s Harbor is the perfect setting for Halloween festivities. But when a reenactment of a Prohibition-era gangster’s murder ends with a literal bang and a dead actor from New Jersey, Julia Snowden must identify a killer before she ends up sleeping with the fishes.

My thoughts
Would I recommend it: yes
Will I read more of these series ? yes
Will I read more by these author? yes
A fun and lovable set of Halloween novellas from three cozy mystery series , that is perfect for a short read doing October or even on Halloween , plus its a fun way to check out new series that you might have thought about giving a try but wasn't sure about, in Haunted House Murder by Leslie Meier you have Lucy which is the main character to her series the Lucy Stone ,whos a reporter for her small town paper , in Death by Haunted House by Lee Hollis you have her main character Hayley Powell who is her main character from her series ;Hayley Powell Food and Cocktails Mystery series , and in Hallowed Out by Barbara Ross you get her main character form her series : A Maine Clambake mystery series , and the other great thing about this book is that all 3 stories take place in small towns , and around Halloween so you just have to set back and enjoy the stories and the characters , and watch as they ended up in some Halloween craziness. With that said I want to say thank you to Netgalley for letting me read and review it .