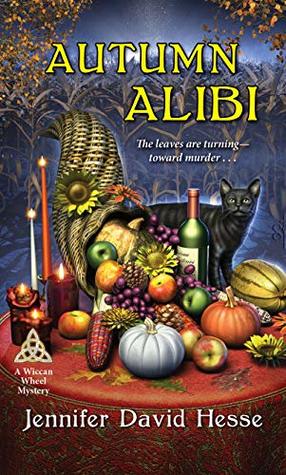 Title: Autumn Alibi
Series: Wicca Wheel Mystery #6
Author: Jennifer David Hesse
Genre: cozy mystery
Rating: 5
After a hectic year, Edindale, Illinois, attorney Keli Milanni is ready to welcome autumn by counting her many blessings. But a case of murder could cause her to fall behind . . .

Keli is hoping that Mabon, the Wiccan Autumn Equinox, will bring balance back into her life. But it’s death that comes calling when she’s asked to consult on an estate case. Recently passed, Elaine Turnbull left everything, including her valuable art and antiques collection, to her granddaughter, Lana. But Lana has been missing for years, ever since a tragedy tore her family apart. Also missing may be Elaine’s most recent will. Then there’s the not-so-small detail that Elaine’s death by natural causes may not have been so natural after all . . .

With the help of her boyfriend Wes, who knew Lana in high school, Keli starts digging into Elaine’s past—and her journals. Soon she discovers that everyone, from Elaine’s caretaker to her curator, had a motive for murder—along with a seemingly rock-solid alibi. Between missing people, missing documents, a string of vandalism against her friends, and the sense she’s being stalked, Keli is feeling a disturbing chill. Now not even her Wiccan protection rituals may save her from a killer with a cold heart that’s far from grateful

My thoughts
I want to say thanks to Steeped In Books ( a booktuber I watch) for talking about this one , that I went running to Netgalley as well as  to  the Kensington page there to see if they had it still and as soon as I say it I picked it up ,  in fact if I remember right its because of her that I picked up one other book they had, and other thing that mad me pick it up was the series title : Wicca Wheel Mystery series as well as the cover ,it just say fall is here. Another thing is even though I haven't read the others in this series but after reading this one I do , I found myself enjoying it a lot , and the characters there was times they had me smiling at what was going on. One thing I loved was how the main character Lana was a lawyer but she practice Wicca as well and that the author showed that Wicca was not only for blessing your surroundings but that it was all so the re blessing of the land and that it could also be used for protection . And the story itself was a well-crafted plot, with several suspects who are all suspicious, a few twists and turns and a finale that allowed all of the threads/clues to come together it was your playing the game Clue where your trying  to figure out who doing it and why , which made this book even more fun to read, with that said I want to thank Netgalley for letting me read and review it  exchange for my honest opinion.