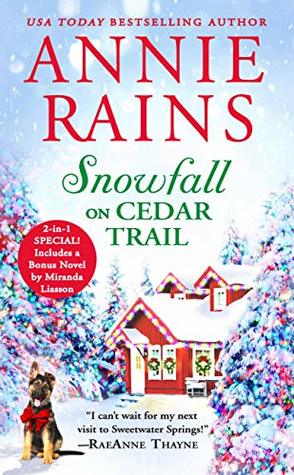 Title: Snowfall On Ceder Trail
Series: Sweetwater Springs #3
Author: Annie Rains
Bouns novel inside
Title: Then There Was You
Author: Miranda Liasson
Series: Angel Falls #1
Genre : romance
Forever Romance
Pub date :Oct 8th 2019
Rating: 5 for the hole book
Snowfall On Ceder Trail:
Last Christmas was tough for Halona Locklear and her seven-year-old son Theo, who hasn't spoken a word since his father's death. This year, Halona wants nothing more than to give him a good holiday and to hear his sweet voice again. Enrolling him in the Mentor Match program might help, but when Theo gets matched with Sweetwater Springs Chief of Police, Alex Baker, Halona realizes that the handsome hero might know secrets about her past that she is determined to keep buried.
Chief of Police, Alex Baker, re-opens his father's hit-and-run cold case every December, hoping to finally solve it. This year, his plate is full with being a Mentor Match to a young seven-year-old boy as well. His biggest obstacle, however, is fighting his attraction to the boy's mother, Halona. As Alex gets close to solving his father's cold case, he learns that those closest to him may be in danger -- including Halona. Alex has already lost one of the most important people in his life; he isn't about to lose her too, even if it means walking away to keep her safe.

Then There Was You

Fresh from her residency, Serafina Langdon returns to her hometown to join her father's general medical practice a year after her fiancé jilted her. More than anything, Sara just wants to move on, but that becomes impossible once she discovers that the man who was responsible for her broken engagement, and who is also her ex-fiance's best friend, is now the Angel Falls chief of police.

As police chief, Colton Walker is devoted to his small town, and he's equally determined to avoid its newest resident. He and Sara have always gotten along like oil and water, and since the bachelor party incident, he's her Enemy #1. But after sharing an unexpected--and unexpectedly hot--kiss, avoiding Sara becomes the last thing he wants to do. She's not the woman he used to know, and he's falling for her. But when her ex-fiancé returns to Angel Falls, Colton will have to decide if the woman he's always fighting with is also worth fighting for.

My thoughts
Snowfall On Ceder Trail
Even though this is book 3 in a series , I had no trouble with jumping in and reading this, and what can I say ,that I'm glade I did ,it had me smiling all the way though the book and had me thinking this could be one of those hallmark movies if they did it right , and the characters , the more I read and saw them interact with one other the more I grew to love them . I loved how everyone seemed to think and say that Halona and  Alex belonged together ever before they was together , and Halona's mother , I loved that woman ,loved how she loved her kids,her grandkids and even Alex and her people's history , and i was always looking forward to seeing her character in the book . I also loved how Alex's was picked to be the  Mentor for Theo and understood what Theo was going though . So if your looking for a cute and adorable romance then you need to check this one out, plus its the perfect Christmas romance reading. With that said I would Love to thank Netgalley and Forever Romance for letting read and request it plus for Forever sending me a physical copy as well in exchange for my honest opinion .


My thoughts
Then there Was You:
This is also the first time I've ever read anything by this author and what can I said but it looks like I found another new to me romance author that I like to read , in fact thanks to Netgalley and Forever Romance I have book 3 in this series to read as well which is : All I Want for Christmas Is You, it funny but when it came to my romance I never thought I would love the ones that took place doing Christmas time in fact I don't think any of the romance I've read before the ones I've discovered before the Forever romance ones took place doing or around Christmas but with ones is I'm finding that I love when their cute and adorable . To tell the truth this one almost became a 4 star for me but the more I read the more I grew to love the characters and their struggles as well as their inter action with each other and their families even though there was times I thought Halona need to stop worrying about what her father thought , but end the end it become a 5 star read for me , and another thing that made it a five star was that it was a slow burn romance that you could just get lost in . With that said I want to thank Forever Romance for giving me the change to read it as well .