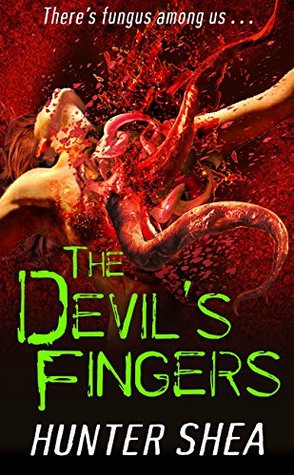 One Size Eats All #3

WHAT HAS LONG PINK FINGERS AND SMELLS LIKE ROTTING FLESH?
It is a slime-covered fungus known for its pinkish red tentacles and pungent odor. It is indigenous to Australia but has spread to North America. Its Latin name is Clathrus Archeri, also known as Octopus Stinkhorn. Most people call it The Devil’s Fingers . . .

I DON’T KNOW BUT IT’S GROWING ON YOUR NECK.
Deep in the woods of Washington, botanist Autumn Winters stumbles onto a field of the luridly colored fungi. Two of her fellow campers make the mistake of touching it. Now it’s growing on them. Fleshy gelatinous pods. Sprouting from their skin. Feeding on their blood . . .

AND IT’S STILL GROWING.
Autumn watches in horror as her friends are transformed into monstrosities—grotesque, human-fungal hybrids as contagious and deadly as any virus. Autumn knows she must destroy these mutations before they return to civilization. But if there’s one thing that spreads faster than fear,
it’s The Devil’s Fingers . . .

My thoughts
rating: 4
would i read any more by this author: yes
Hunter Shea is a go to author of mine ,even if his a hit or miss for me, and I can't believe that it took me this long to read this , because after reading this I'm not going outside at all. There's no way that I want a fungus to take over my body. And not just any fungus but a fungus that could kill you, and has no problem in do so, just like the first 2 books in this series , there is a touch of what you would see in the old black and white movies which I love to watch , in fact I would say that this would have been a good one to watch if it was a movie from the 50s or 60s ,because they knew how to make movies back then, I'm not sure if they could do it today or not with out missing the up the story. With that said I want to say thanks to Netgalley for letting me read and review it exchange for my honest opinion.