The Woman In the Veil 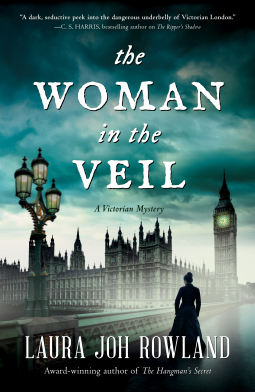 Sarah Bain and her friends Lord Hugh Staunton and Mick O'Reilly are crime scene photographers for the Daily World newspaper. After solving a sensational murder, they're under pressure to deliver another big story. On a foggy summer night, they're called to the bank of the river Thames. The murder victim is an unidentified woman whose face has been slashed. But as Sarah takes photographs, she discovers that the woman is still alive.

The case of "Sleeping Beauty" becomes a public sensation, and three parties quickly come forward to identify her: a rich, sinister artist who claims she's his wife; a mother and her two daughters who co-own a nursing home and claim she's their stepdaughter/sister; and a precocious little girl who claims Sleeping Beauty is her mother. Which party is Sleeping Beauty's rightful kin? Is someone among them her would-be killer?

Then Sleeping Beauty awakens--with a severe case of amnesia. She's forgotten her name and everything else about herself. But she recognizes one of the people who've claimed her. Sarah is delighted to reunite a family and send Sleeping Beauty home--until one of the claimants is murdered. Suddenly, Sarah, her motley crew of friends, and her fiancé Detective Sergeant Barrett are on the wrong side of the law. Now they must identify the killer before they find themselves headed for the gallows.

My thoughts
Would I recommend it? yes ( but I would read the first 3 books before this one)
Will I read more of this series ? yes
Would I read anything else by this author ? maybe
This is the first time I've ever read a book that's part of a series where the main character is a woman who happenings to be  crime scene photographer in 1890, another thing is I love how it has a touch of the LGTBQ in it , one thing I didn't like was how at times I felt a bit lost because of how aften Sarah was constantly reflecting on her own thoughts and feelings , and then doing those times I would have to go back and re read what I already read ,but once I got past those moments I enjoyed the story ,but then why wouldn't I it has a bit of everything in it , murder, romance , a mystery of who the woman is and why was she almost killed . With that said I want to thank Netgalley for letting me read and review it exchange for my honest opinion.