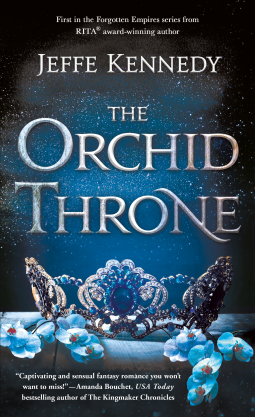 A PRISONER OF FATE

As Queen of the island kingdom of Calanthe, Euthalia will do anything to keep her people free—and her secrets safe—from the mad tyrant who rules the mainland. Guided by a magic ring of her father’s, Lia plays the political game with the cronies the emperor sends to her island. In her heart, she knows that it’s up to her to save herself from her fate as the emperor’s bride. But in her dreams, she sees a man, one with the power to build a better world—a man whose spirit is as strong, and whose passion is as fierce as her own…

A PRINCE AMONG MEN

Conrí, former Crown Prince of Oriel, has built an army to overthrow the emperor. But he needs the fabled Abiding Ring to succeed. The ring that Euthalia holds so dear to her heart. When the two banished rulers meet face to face, neither can deny the flames of rebellion that flicker in their eyes—nor the fires of desire that draw them together. But in this broken world of shattered kingdoms, can they ever really trust each other? Can their fiery alliance defeat the shadows of evil that threaten to engulf their hearts and souls?

My thoughts
Would I recommend it? yes
Will be going on with the series? maybe
Would I read more by this author? maybe
The genre says its romance but it has a touch of fantasy to it, which speaks of prophecy,magic, beauty, and war .And while the premise does have huge potential and did in fact piqued my interest , there was times i was at a lost at what was happening because of how wordy the author has it, which means I had to go back and re read sorting parts of it , but on the other hand the world building was great and that helped some what and made me want to keep on reading it and finding out more about the island kingdom of Calanthe and its young Queen as well as its people , even though it was slow going though out the story. Another thing i liked about it was how it talked about a prophecy which also kept me reading it because it reminded me a little bit of the Lord Of the Rings. Plus another thing it has going for it is that its the first time I've ever read a fantasy romance .With that said I want to thank St.Martin's and Netgalley for letting me read and review it exchange for my honest opinion.