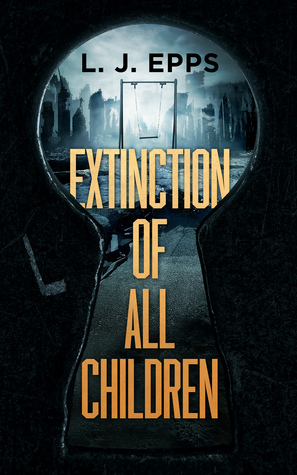 Title: Extinction of All Children
Series: Extinction Of All Children #1
Author:L.J.Epps
Genre: dystopian
Pages: 231
Publishers
Published
Rating:3.5
A young adult, fantasy novel about a teenager who is the last eighteen-year-old in her territory. There will never be another child; every baby born after her has been taken away. Everyone wonders why she survived.

Emma Whisperer was born in 2080, in the small futuristic world of Craigluy. President Esther, in charge for the last twenty-two years, has divided their world into three territories, separated by classes—the rich, the working class, and the poor—because she believes the poor should not mingle with the others. And, the poor are no longer allowed to have children, since they do not have the means to take care of them.
Any babies born, accidentally or willfully, are killed. Emma is the last eighteen-year-old in her territory; every baby born after her has died. Somehow, she survived this fate.
During the president’s Monday night speech, she announces a party will be held to honor the last child in the territory, Emma Whisperer. Emma must read a speech, expressing how happy she is to be the last eighteen-year-old.
Emma doesn’t like the rules; she doesn’t believe in them. So, she feels she must rebel against them. Her family doesn’t agree with her rebellion, since they are hiding a big secret. If this secret gets out, it will be disastrous, and deadly, for her family.
During Emma’s journey, she meets—and becomes friends with—Eric. He is one of the guards for the president. She also befriends Samuel, another guard for the president, who is summoned to watch over her. As Emma meets new people, she doesn’t know who she can trust. Yet, she finds herself falling for a guy, something which has never happened before.
After doing what she feels is right, Emma finds herself in imminent danger. In the end, she must make one gut-wrenching decision, a decision that may be disastrous for them all.

My thoughts
Would I recommend it ? yes
Will I continue on with the series ?yes
Will I read more by this author? Maybe
If you liked the  Divergent trilogy then this might be up your alley , since just as in the  Divergent trilogy ,this one is also a dystopian and there are three different territories - which are separated by classes- the rich, the working class and the poor , in which case our main character Emma which is part of ,but the only thing wrong with that picture is there are no children born after her at all.While I did like it ,there was times it did in fact remind me of the Divergent series , which I actually tried to read and decided that it wasn't for me , but this one kind of surprised me and I'm glad I decided to give it ago, one of the things I liked about was the interaction between Emma, Eric and Samuel as well as the interaction between Emma and her brother , and seen them come to live , i do have to say that if you have any triggers then this series might not be for you because it does deal with abuse, death, imprisonment, murder, infanticide , torture, violence and other topics that might be hard to read about, with that said I want to thank Netgalley for letting me read and review it exchange for my honest opinion and I will be going on to read books 2&3 since I have them as well.////////////////////////////////////////////////////////