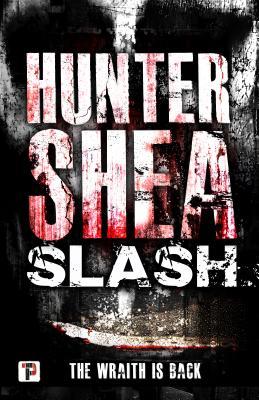 Title: Slash
Genre: horror
October 10,2019
pages:256
Five years after Ashley King survived the infamous Resort Massacre, she’s found hanging in her basement by her fiancé, Todd Matthews. She left behind clues as to what really happened that night, clues that may reveal the identity of the killer the press has called The Wraith.

With the help of his friends, Todd goes back to the crumbling Hayden Resort, a death-tinged ruin in the Catskills Mountains. What they find is a haunted history that’s been lying in wait for a fresh set of victims. The Wraith is back, and he’s nothing what they expected
My thoughts

WOW, what a story, it had me setting on the edge of my bed, and give me goosebumps, its dark and twisted with non - stop action ,gore, and a touch of the supernatural to it that somehow makes it work, and once again it reminds me somewhat of the old black and white movies I love to watch mixed with the modern-day slasher movie,which makes it work  on so many levels ,in fact I would say that the how to survive a slasher movie rules  might not work in this situation, so be prepared to not survive the night . With that said I want to thank Netgalley for letting me read and review another win for this authour in exchange for my honest opinion.
Tweet