Crisis In The Red Zone 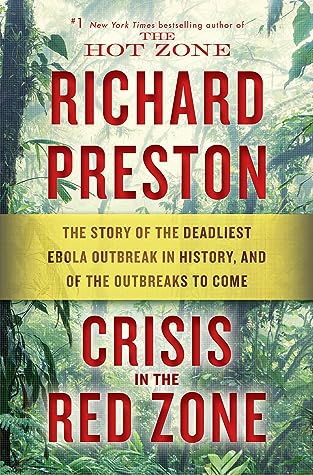 Crisis in the Red Zone: The Story of the Deadliest Ebola Outbreak in History, and of the Outbreaks to Come

Author: Richard Preston
Pages: 400
Genre: Science
Pub date: July 23,2019
The 2103-2014 was the deadliest ever--but the outbreaks continue. Now comes a gripping account of the doctors and scientists fighting to protect us, an urgent wake-up call about the future of emerging viruses--from the #1 bestselling author of The Hot Zone, soon to be a National Geographic original miniseries.

This time, Ebola started with a two-year-old child who likely had contact with a wild creature and whose entire family quickly fell ill and died. The ensuing global drama activated health professionals in North America, Europe, and Africa in a desperate race against time to contain the viral wildfire. By the end--as the virus mutated into its deadliest form, and spread farther and faster than ever before--30,000 people would be infected, and the dead would be spread across eight countries on three continents.

In this taut and suspenseful medical drama, Richard Preston deeply chronicles the outbreak, in which we saw for the first time the specter of Ebola jumping continents, crossing the Atlantic, and infecting people in America. Rich in characters and conflict--physical, emotional, and ethical--Crisis in the Red Zoneis an immersion in one of the great public health calamities of our time.

Preston writes of doctors and nurses in the field putting their own lives on the line, of government bureaucrats and NGO administrators moving, often fitfully, to try to contain the outbreak, and of pharmaceutical companies racing to develop drugs to combat the virus. He also explores the charged ethical dilemma over who should and did receive the rare doses of an experimental treatment when they became available at the peak of the disaster.

Crisis in the Red Zone makes clear that the outbreak of 2013-2014 is a harbinger of further, more severe outbreaks, and of emerging viruses heretofore unimagined--in any country, on any continent. In our ever more interconnected world, with roads and towns cut deep into the jungles of equatorial Africa, viruses both familiar and undiscovered are being unleashed into more densely populated areas than ever before.

The more we discover about the virosphere, the more we realize its deadly potential. Crisis in the Red Zone is an exquisitely timely book, a stark warning of viral outbreaks to come.

My thoughts
Rating: 5
Would I recommended it? yes
Will I read anything else by this author? yes
This is the first time I've ever read anything about the Ebola virus and I'm glad that I decide to pick this up, First off the author brings to live and gives an in dept look of the Ebola virus and how it affects the body and how its passed from one person to the next , he goes also in dept of how the doctors and nurses puts their very live at risk to help fight this virus and the steps they and they government as well as the NGO take as well, he brings to life not only the virus but the people who fight and died from it , as well as how the families of the deceased and how the villagers treated their lost ones and goes into explaining how the virus was past though out the families as well as the villagers. He also tells you about the six different types of Ebola .Yes you read right there are six different types .And those
6 known species of Ebola is :  Zaire Ebola, Sudan Ebola, Reston Ebola, Tai Forest Ebola, Bundibugyo Ebola and Bombali Ebola, their know as the six Ebola sisters,and that
Out of the 6 ,the most lethal is the Zaire or is the homicidal elder sister. not only is it the most deadly of the five Ebolas but it is also the most deadly of all known filoviruses, that includes the Ebolas. It's the Lord of the strains.
After reading this book I can understand a little bit better why we need to study these types of virus and how to fight them , but it also scare to think what would happening if they ever got lose of here , or someone using them as a weapon but over all  its still a good book to read with that said I want to thank Netgalley for letting me read and review it .
Tweet