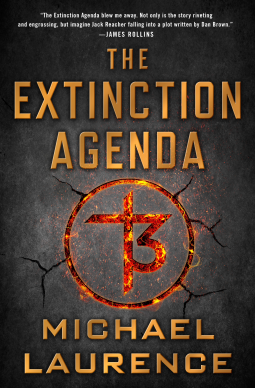 Genre: Adult Fiction
Pages:400
August 27th 2019 by St. Martin's Press
An FBI agent fights to stop a conspiracy to unleash a deadly virus on the world in this propulsive, exhilarating new thriller.

We’re fighting a war, whether we choose to admit it or not. A war for survival. A war we may have already lost.

While searching for the man who killed his partner and his wife, FBI Special Agent James Mason uncovers a shadow organization on the brink of enacting its genocidal agenda and a sinister mass murderer who’s been photographed at the epicenter of every historical pandemic since the outbreak of the Spanish Flu in 1918—without appearing to age.

Mason’s quest for answers takes him from the criminal underbelly of Denver to its untouchable elite, from a dark union at the turn of the last century to a network of Nazi collaborators and a plot for global financial domination. Aided by his longtime friends Gunnar Backstrom—a corporate espionage gun-for-hire—and Ramses Donovan—a sin merchant of questionable morality—Mason uncovers a conspiracy against mankind more than a century in the making. A conspiracy to unleash a deadly virus and make a killing in the process.

Can Mason's small team bring down a seemingly unbeatable shadow empire that's rooted in every facet of our society, or does its influence run too deep?

The Extinction Agenda is the first book in a new series. It falls between Brad Thor and Boyd Morrison on the conspiracy spectrum, James Rollins and Steve Berry on the historical spectrum, and the story-telling and world-building skill of John Connolly
My thoughts
Rating: 4
Would I would recommend it? yes
Will I read any more of this series? yes
Will I read any more by this series? yes
Kind of slow but it does pick up the more you read . It  also reminds me of books that James Rollins , Lee Child as well as Dean Koontz would write just to name a few , it keeps you guessing on what is going on and it shows you want can happen when you apply sorting sciences together . So if you like authors like James Rollins or Dean Koontz then you might like this one since it has a bit of every thing in it , Science, Politics, conspiracy, with that said I want to thank Netgalley for letting me read and review it exchange for my honest opinion . As well as St Martin's Press for invitation to read it and review it, can't wait for the next book to come out , once again thank you.
Tweet