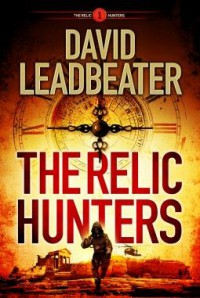 One of the lost ancient wonders of the world is still out there. . .

In the same style as the Matt Drake series comes The Relic Hunters, a novel packed with camaraderie, action, archaeological mysteries and a brand-new team of hard-hitting, entertaining and highly engaging characters.

Guy Bodie is a relic smuggler, a tough man in a tough world, with self-taught skills in smuggling and combat. He trusts only five people, a proven team, until one of them betrays him, landing him in a hellish Mexican prison. Guy Bodie's chances of survival are diminishing by the minute.

To his surprise, the American CIA then break him out, tell him to hand-pick a team, and start right back at his old job - only this time he's working for them - chasing down the most infamous relics in history and trying to solve the greatest heist - how one of the world's seven ancient wonders was once stolen and then concealed.

With thrilling action across the globe, The Relic Hunters begins a new series in the Matt Drake vein of archaeological mystery, historical adventures and team camaraderie

Would I recommend it? no

Will I be going on with the series? no

I just couldn't get into the story and I was so hoping to at least wither like it or love, but unfortunately I don't ,there was times I wanted to DNF it so bad and there was times I had to put it down, other then that made me pick it up was that it sounded like it was a book James Rollins would write but once again unfortunatelty its not, at lest with Mr,Rollins books I'm hooked from the very start, don't want to put them down and can't wait to read more of the series . With that said I want to think Netgalley for at least letting me read and review it exchange for my honest opinion.