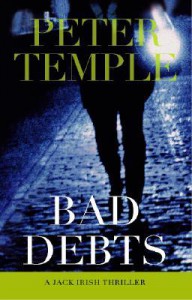 Title : Bad Debts Series:Jack Irish Author: Peter Temple Genre: Crime Fiction Pages:318 Edelweiss+ ARC Book synopsis A phone message from ex-client Danny McKillop doesn’t ring any bells for Jack Irish. Life is hard enough without having to dredge up old problems: His beloved football team continues to lose, the odds on his latest plunge at the track seem far too long, and he’s still cooking for one. When Danny turns up dead, Jack is forced to take a walk back into the dark and dangerous past. With suspenseful prose and black humor, Peter Temple builds an unforgettable character in Jack Irish and brings the reader on a journey that is as intelligent as it is exciting My thoughts rating: 3.5 Would I recommend it ? yes Will I be be reading the rest of the books in this series?yes Its slow, really really slow, so that its hard to understand what is going on at the time but the more you read the more you start to understand but it is still slow going though out the book, there was times I wanted to just put it down but I kept going on to see if the story would pick up and it does but it take a very long while to do so. Basally there's non thing not to like : the writing good , plot is complicated , there was just one thing that did get on my nerves and that was where the character seemed to bring up the fact that his wife is dead and that just lost it for a while . Other then at it was an ok read more me. With that said I want to thank Edelweiss+ for letting me read and review it exchange for my honest opinion.