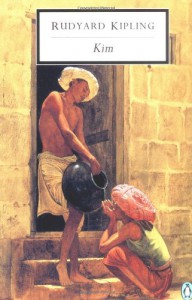 Kim is set in an imperialistic world; a world strikingly masculine, dominated by travel, trade and adventure, a world in which there is no question of the division between white and non-white.

Two men - a boy who grows into early manhood and an old ascetic priest, the lama - are at the center of the novel. A quest faces them both. Born in India, Kim is nevertheless white, a sahib. While he wants to play the Great Game of Imperialism, he is also spiritually bound to the lama. His aim, as he moves chameleon-like through the two cultures, is to reconcile these opposing strands, while the lama searches for redemption from the Wheel of Life.

A celebration of their friendship in a beautiful but often hostile environment, 'Kim' captures the opulence of India's exotic landscape, overlaid by the uneasy presence of the British Raj.

My thoughts
rating: 3.5
Would I recommend it? yes
Will I read more by this author ?maybe
Slow going and kind of boring at the start , but the more you read the more it does pick up . But I do have to say the movie Kim ( 1950) is way better then the book. There was times I want to put the book down but I didn't and I'm glad I read it even though I love the movie better . for those who don't know  what I'm talking about the movie Kim ( 1950) has  Errol Flynn as Mahbub Ali, the Red Beard. Dean Stockwell as Kim. Paul Lukas as Lama. Robert Douglas as Colonel Creighton. Thomas Gomez as Emissary. Cecil Kellaway as Hurree Chunder. Arnold Moss as Lurgan Sahib. Reginald Owen as Father Victor.
movie trailer:
https://www.youtube.com/watch?v=b5hqKsMyPsk