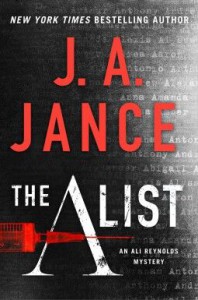 book synopsis
More than ten years after the abrupt end of her high-profile broadcasting career, Ali Reynolds has made a good life for herself in her hometown of Sedona, Arizona. She has a new house, a new husband, and a flourishing cybersecurity company called High Noon Enterprises, where her team of veritable technological wizards hunts down criminals one case at a time.

But the death of an old friend brings Ali back to the last story she ever reported: a feel-good human interest piece about a young man in need of a kidney to save his life, which quickly spiraled into a medical mismanagement scandal that landed a prestigious local doctor in prison for murder.

Years may have passed, but Dr. Edward Gilchrist has not forgotten those responsible for his downfall—certainly not Ali Reynolds, who exposed his dirty deeds to the world. Life without parole won’t stop him from getting his revenge. Tattooed on his arm are the initials of those who put him behind bars, and he won’t stop until every person on that Annihilation List is dead

My thoughts
rating:
Would I recommend this series: yes
Would I read anything else by this author: Yes { In fact I have and own one of her books :Downfall ( Joanna Brady #17) and I loved it )
Would I read more of this series: yes
Even though is this the second time I've read anything by her I can say that this is one series I want to going with , its fast pace and even though this is book 17 I was able to understand what was going on, loved the characters ( will most of the characters) , loved how the story just pulled me into and before I knew it I was hooked, loved how you get the backstory of the characters and how will the story flows together. As for the characters themsleves I couldn't stand Dr.Edward Gilchrist , no take that back I won't say I couldn't stand him ,in fact that's to easy , I would say I despised him and the way he thought it was ok to do what he did those who came to him for help, and that part of the story made it more realistic because sadly there are doctors who does in fact do the same thing he did and probably still gets away with it to this day , all he cared about was the money , not about how he was hurting the families and how he might be casing harm to them.In fact I wouldn't call him a Man ( BECAUSE IF HE WAS ONE THEN HE WOULD HAVE ADMITTED TO HIS WRONGDOING ) HIS LESS THEN A MAN, HIS A MOUSE NO TAKE THAT BACK HIS LESS THEN A MOUSE, HIS A NO ACCOUNT RAT.To find out more you have to read The book ,with that said I want to thank Netgalley for Lee me read and review it exchange for my honest opinion ,and I can't wait to read more by this author.