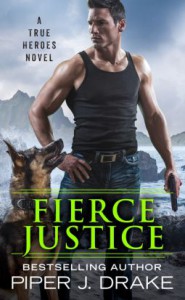 Title: Fierce Justice
Series: True Heroes #5
Author: Piper J.Drake
Pages: 304
Genre: romance
Forever
book synopsis
As a K9 handler on the Search and Protect team, Arin Siri needs to be where the action is--and right now that's investigating a trafficking operation in Hawaii. When an enemy from her past shows up bleeding, she's torn between the desire to patch Jason up or put more holes in him. Then again, the hotshot mercenary could be the person she needs to bust open her case.

Jason Landon's team had always been about taking the contract, getting paid, and not asking questions. But after his last mission went south, he started to get curious. His questions quickly drove him out of his mercenary group and off the grid. Now, the only people he can think of to help him are the Search and Protect team -- and the dark beauty who is as ready to kill him as she is to bed him. And he's totally ready to risk the former for the chance at the latter. But he isn't the only person with a target on his back. Arin's in danger too, and he'll do everything he can to keep her safe.

My thoughts
Rating: 5
Would I recommend this series: yea
Will I be reading any more by this author: yes
Since this is my first time reading anything by this author I can say and will say that I loved it , even though the romance was slow burning it still worked in the story and didn't take anything away from it, I loved the interaction between the characters especially with Arin and Jason. Since I've read the hole series before this one and I do have one other one to read I would say its up to you to read it as a series or as a standalone , in my case just reading this one had made me want to read books as a series . I do have to say that there is one character I don't like as much as the others and that's Arin 's sister , how she acts towards her and makes her feel.With that said I would like to thank Netgalley for letting me read and review it ,exchange for my honest opinion