Wouldn't pick this one up 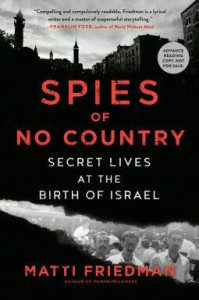 Title : Spies of No Country

This was sent to me unsolicited by the publisher in exchange for my honest opinion, which this will be ,

Four Arab Jews emigrate to Israel in 1948, at the birth of the new nation. Recruited almost immediately to spy for Israel, they are sent back to Lebanon and elsewhere to pose as Arabs (which they actually are) and collect intelligence. They operate out of a kiosk in Beirut. It is dangerous work and they don't know to whom they are reporting; they don't know whether their information is useful; and by the end, they don't know who they have become. The unit--called the Arab Section--will eventually become the Mossad, Israel's vaunted intelligence agency.

Borderland is about the disguises and identities of particular spies, but it's also about how Israel itself has assumed a false or misleading identity. Israel presents itself as European country when in fact it's comprised of Middle Easterners like the men in this story. And, according to Matti Friedman, that partially explains the politics of the country and why it often baffles the West. With writing that is both stunning and journalist, Borderland gives us a window into the past and the future of the Middle East

My thoughts
Rating: DNF at only 55 pages in it

Would I recommend it : No

Will I pick any thing else up by this author : No

Why : This book reads like it all about politics , not only that there was comments in it that was insulting and before anyone says anything I even showed those comments to a friend and she agreed with me on that.Not only was it insulting but it was also  uneven with an irregular structure resulting from the mashing together of personal accounts, historical documentation, and the author’s occasionally inserted opinions that it mad it  confusing to read and that was just in the first 55 pages I've read,if it like that  in those first couple of pages then it'll be like that though out the book. just trying to figure out what was being said and try to get over the comments was giving me  a headache and with that being said I'm DNF it 100% .