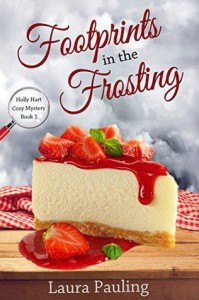 Title: Footprints in the Frosting

It’s the Grand Opening for Holly Hart’s new business, Just Cheesecake. When footprints in the frosting lead to a body facedown in one of her cheesecakes, Holly becomes a prime suspect.

With her opening day delayed, Holly deals with a nosy no-good reporter and the local cop, the handsome Officer Trinket, as she puts her sleuthing skills to the test to save her business and her name. With the help of her dog, Muffins, she needs to find the real murderer, before the killer looks to frost someone else.

would I recommend it : yes

will I be going on with this series : yes

I was laughing my head off at the times that Holly got in to stuff , either because of her little dog or herself . And the other characters where just as funny . What can i say its a cozy mystery that will make you laugh , and fell in love with the characters .