book review ( a must read) 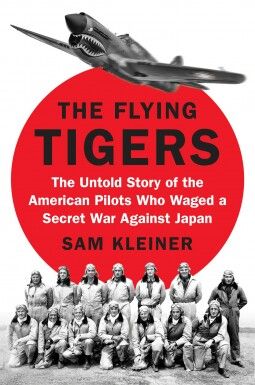 Sam Kleiner’s The Flying Tigers uncovers the hidden story of the group of young American men and women who crossed the Pacific before Pearl Harbor to risk their lives defending China. Led by legendary army pilot Claire Chennault, these men left behind an America still at peace in the summer of 1941 using false identities to travel across the Pacific to a run-down airbase in the jungles of Burma. In the wake of the disaster at Pearl Harbor this motley crew was the first group of Americans to take on the Japanese in combat, shooting down hundreds of Japanese aircraft in the skies over Burma, Thailand, and China. At a time when the Allies were being defeated across the globe, the Flying Tigers’ exploits gave hope to Americans and Chinese alike.

Kleiner takes readers into the cockpits of their iconic shark-nosed P-40 planes—one of the most familiar images of the war—as the Tigers perform nail-biting missions against the Japanese. He profiles the outsize personalities involved in the operation, including Chennault, whose aggressive tactics went against the prevailing wisdom of military strategy; Greg “Pappy” Boyington, the man who would become the nation’s most beloved pilot until he was shot down and became a POW; Emma Foster, one of the nurses in the unit who had a passionate romance with a pilot named John Petach; and Madame Chiang Kai-shek herself, who first brought Chennault to China and who would come to visit these young Americans.

A dramatic story of a covert operation whose very existence would have scandalized an isolationist United States, The Flying Tigers is the unforgettable account of a group of Americans whose heroism changed the world, and who cemented an alliance between the United States and China as both nations fought against seemingly insurmountable odds.
rating: 5 stars
genre: Non fiction
My thoughts
If your in to the flying tigers like i am or just like to read about WW2 then this is a must read . Mr. Kleiner does anazing job of bring to life the  story of the Flying Tigers, what they went though , as well as their family , and the people they fight with . Its the type of book that once you start to read you can't put it down or don't want to stop reading , with that said i want to thank Netgalley for letting me read and review it .
Tweet